HaaNdi YellowMah, considered to be the prince of VenRap because of his authentic verses and unique music delivery style, is one artist who is the pride of Vhembe District.

Last week he released a music video of his signature song, titled Yellow Yellow, which is a concept referring to his stage name of HaaNdi YellowMah, which means “this is Yellow” or “here comes Yellow”.

“This song was released late last year, but we only did its video now, for you’ll agree for sure that the making of a music video is not child’s play – it’s expensive,” he said. “Yellow Yellow is more personal in that I am showcasing my love for the colour yellow and what it means for me. Each one of us has got a colour that says something to us.”

He said that, for him, yellow symbolised joy, happiness, and excitement. The song, which was first sampled on stage during a festival at the Bush Valley Gardens late last year, has become a favourite among music lovers in the district. “I continue to receive acknowledgements in most parts of the province, and I feel that it’s now the time that I start touring those other areas and giving them my music. My music is proving to be getting a warm reception.”

The saying that humble beginnings and persistence bring about good results is very apt regarding HaaNdi YellowMah, who is currently indisputably the most potent missile in the VenRap genre.

“It’s heart-warming to notice that I have managed to endear myself to the youths who follow VenRap and understand the genre for what it is – a form of entertainment and youth culture,” he said. “I believe that popularity is earned through hard work, for artists mostly work in the privacy that the studios offer them, but get to shine in the open world.”

HaaNdi YellowMah was crowned Star of the Town during the SABC2's small-town Showville talent competition in July 2018. His music has been getting massive airplay on Channel O since last year’s lockdown, which is a dream for many artists.

Yellow Yellow can be viewed at https://youtu.be/OCWIMPlK4Ns. 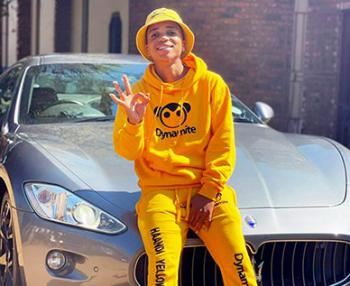