Jazz whizz Divhambele gets it right on the first try

Most musicians hardly make an extraordinary impression when they start out, but this jazz artist happens to be among the few talented ones who have managed to penetrate the industry with their first offering.

The band’s single, Lufu mishumo yau, which was released in December last year, is still on many fans’ favourite playlists. In light of the Covid-pandemic the world is currently faced with, the song touches on the subject of dying, and Divhambele voices his displeasure about all the death around us.

“We have lost loved ones through the years, but it seems like 2020 was the worst. Therefore, we need God to continue to provide us with comfort and solace,” he says. “We need God to heal our land in all aspects. We are plagued by the Covid-19 pandemic and many other sicknesses and need God’s intervention.”

He says that it angered him to think that “when we sit down to eat, death joins us at the table”, as the lyrics of the song go. This is a metaphoric expression which means that death comes unexpectedly.

“One cannot invite death; it will come to each one of us at its own time, sooner or later. That is why we always need to find peace in the fact that God has given us the opportunity to enjoy life while we are still alive - right now, today,” he said.

Divhambele learned to play the guitar at the age of 10. “Soon I was strumming it in a way that attracted many listeners, who also complimented me on my singing,” he tells.

Perhaps the most admired aspect about this talented musician is that he is not conceited, nor does he blow his own trumpet as singer and guitarist. His enjoys using these talents, and at the same time his music mellifluously pleases the listener’s ear. “Music means everything to me.”

During the day, he works as a pharmacy assistant at Imperial Health Sciences. “As much as I believe in medicine, I also see meaningful music as part of ‘spiritual medicine’,” he says.

He is currently working on a full-length album, which is due in August this year. Divhambele can be reached on Tel 082 0751 832. 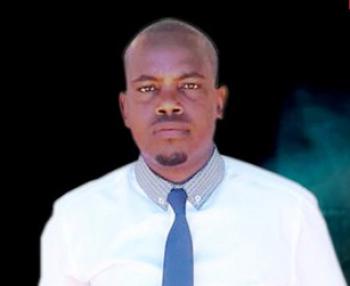 Divhambele Nemavunde is among the few who managed to penetrate the music industry with his first offering. Picture supplied.