MSW Media, a Vhembe-based film company, has just released another film. While they are best known for releasing human interest films, karate movies, action, and comedy, they have released a Christian movie, titled Yeso Wanga, this time around.

Yeso Wanga, which loosely translated means ‘my Jesus’, was released a fortnight ago, and is freely accessible on YouTube. The film is based on the Book of Acts in the Bible.

“We have decided to come with Yeso Wanga, a Christian story about a kingdom that is trying to oppose the kingdom of God,” said seasoned film director Musiiwa Makumbi. “This dark kingdom does not want anyone to continue worshiping God as its vicious members were taking over the village.”

He said that the protagonist in the film is a strong lady who sees many people’s faith waning but, as many finally lose their faith, she stands strong for Christ. “She is this one lady who prays until ‘something happens’,” he said.

He said that he had toyed with the idea of filming Yeso Wanga for 10 years. He had many excuses not to start, but he finally put those aside and focused on creating the motion artwork, which is now a proper film. “This is the film that I've been postponing since 2011,” he said adding that he had realised that the time for excuses was over. “We made this film for Good Friday and, of course, beyond.”

“There is a strong message in the film that people must worship God, no matter the nature of difficult situations around them,” he said.

“It was great working with everyone, and I really thank each one of them from the bottom of my heart for the commitment and varied, massive talents that added more value to this film,” Makumbi said. “We worked so hard, until we made it to the end of the movie project. I cannot thank you enough for your time.”

Their previous movies include, among others, Vhatukanani, Ro Tshinyani (Why us women?), Western Style, Ndenwa ya Munna, and Jack the Kidnapper.

Makumbi can be reached on Tel 072 978 3316 or mswmakumbi@gmail.com. Yeso Wanga can be accessed on https://www.youtube.com/watch?v=SZURdbo2j5I. 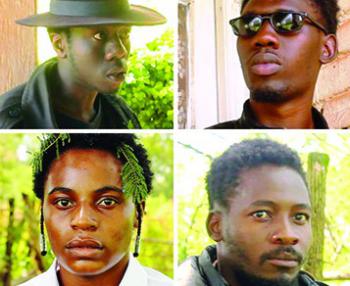