Previously known as Azwifarwi Mukwevho, Gee D'Art uses his art as a medium of expression. As a multifaceted hip hop artist, he started as a DJ doing House and Dancehall beats when he was only in Grade 8.

“I had to leave school early, which means that I couldn’t go to play outside with my friends anymore,” he said. He started making Hip-Hop and Rap beats and later joined prolific artist King Lutendo, one of Gee D’Art’s biggest role models. The two artists collaborated on numerous projects that Gee D’Art had contributed to in terms of production and creativity.

He describes himself as an innovator, in pursuit of breaking Hip-Hop’s production standards by mixing multiple genres and consequently creating a whole new genre altogether. “I create beats when I’m overwhelmed with emotion,” he said. “I utilise the software program, Fruity Loops, as a canvas to paint my emotions. My sound can be best described as space sounds, for I believe that it evokes a certain feeling.”

Gee D'Art is best known for sampling beats. He also believes that sampling a beat brings out the originality of instruments. He is inspired by Metro Boomin, Kanye West, P'ierre Bourne, AKA and a wide range of non-musical figures, like Bernard Arnault, Steve Madden, and Pablo Picasso.

He has so far produced multiple projects for critically acclaimed artists and is happy about the success reaped from them. As a singer, he debuted with Under Pressure EP and was able to launch a listening party. Attendance included Rapper Frank Casino and South African sprinter Akani Simbine.

Gee D’Art has performed at numerous shows across the country alongside award-winning artists such as Sjava and DjTboTouch, to name but a few. Some of the events he attended include art festivals and art exhibitions. “I have recently joined Apple Music and Spotify and I have so far managed to accumulate 1400 streams in seven months, which is a big deal,” he said.

Gee D’Art also has accumulated 6 200 streams on Soundcloud and 8 390 streams on other platforms such as Audiomack, Google Play and Deezer. He has accumulated a total of 21 130 views on YouTube, which comprises interviews, music videos and documentaries.

Gee D’Art can be followed on most social media platforms. 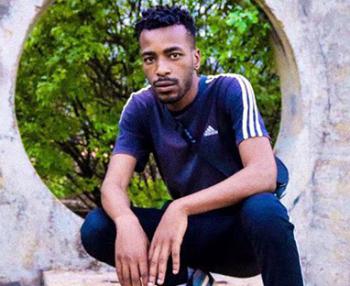 Gee D’Art uses his beats as a medium of expression. Picture supplied.