Tlalamba's dream on the verge of coming true

Even after his annual December gospel concert was postponed because of the tightened lockdown regulations and having to swallow the bitter pill of seeing his dream of recording his first ever extended play (EP) going up in smoke, gospel artist Mulalo Tlalamba did not drop his head. He is on his way to finally recording what will be his debut single.

Tlalamba had already started with rehearsals for his fourth annual show, dubbed The Rising Up With Tlalamba, when President Cyril Ramaphosa announced that the number of people who could gather for indoor events would be reduced. Renowned music stable Mukurob Music had adopted his show and was about to launch him as a standalone artist.

Fortunately, that dream is still on course, with the stable commissioning the recording of the single under their banner.

Born Mulalo Tshamano from Tshituni Thembaluvhilo village in Nzhelele, Tlalamba said: “I always dreamt of releasing my own music, and when my rare opportunity went pear-shaped last year, I was devastated and shattered,” he said. “I thought it was all over for me when my show was cancelled. I struggled to sleep for days, but now I thank God that Mukurob Music is still willing to assist me to realize my dream of becoming a recording artist.”

Three years ago, Tlalamba attempted to record a studio album, but the production left a lot to be desired, and he could not promote the project. Despite hosting three successful concerts, featuring industry heavyweights and fellow local artists, Tlalamba has not released music of his own. With the recording of his much-anticipated single, Tlalamba follows in the footsteps of fellow Nzhelele homeboy Percy Bulasigobo, who released his debut single under Mukurob Music in September 2020.

Mukurob Music’s Robert Netshiunda said he believed that Tlalamba would make it as a recording gospel artist and that his supporters could expect quality music from him. “He has the desire to succeed, he has a good character and his hunger to learn will open doors for him,” said Netshiunda. “We have assembled a good team to back up his dream; we want him to bring something unique into the industry. We have powerful songs lined up, and in due time, we shall announce which one will be released as his first single.”

By his association with Mukurob Music, Tlalamba joins multi-award-winning gospel artists Lufuno Phalandwa and Grace Mulaudzi at a music stable whose vision is to unearth and nurture raw talent from deep rural areas. Tlalamba’s single is scheduled to hit the music shelves in the first week of April 2021. 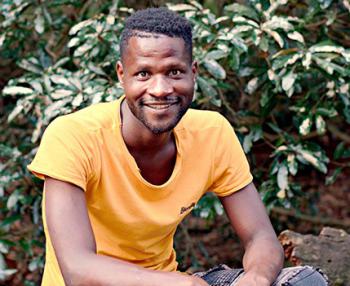 Mulalo Tlalamba, a local gospel artist, is soon to record what will be his first debut single.