Netshikweta has a unique way of playing guitar

Meet Thiathu Netshikweta, the man who has an unusual talent to impress everyone by playing his guitar perfectly without seeing it. A teacher by profession and a successful recording artist, Netshikweta places his six-string guitar behind his head, facing in the opposite direction, supported by his shoulder, while his nails strike the right sweet notes, much to the astonishment of everyone who sees him.

The guitar wizard, who hails from Ha-Makhuvha village near Donald Fraser Hospital, leaves everyone in stitches wherever he performs his unique guitar playing skills. He has suddenly become the toast of his village because he never stops getting invites to perform at social events around his area. But, due to the restrictions on gatherings because of the Covid-19 outbreak, Netshikweta now enjoys playing his guitar for his immediate family members at home.

Asked how he learnt the seemingly difficult skill, Netshikweta said with a smile on his face: “It always seems impossible until it is done. It just came to my mind some 10 years back that, as an artist, I must come up with something different that will make me unique from all other artists. That was where the idea of playing the guitar differently came about,” he said. Netshikweta said that he took some eight months of practise to hone his skills.

“Everyone who saw me for the first time concurred that they had never seen a person who played the guitar the way I do. Who knows, maybe I am the first person to play the guitar in this manner here around the Limpopo Province. I thank the Lord for giving me this rare gift which makes me an instant hero wherever I perform.”

He says when he is not teaching at Ladzani Primary School in the Thengwe area, he takes time to transfer his guitar-playing skills to young people. “My long-term plan is to establish an art school where I will enrol young people to play traditional and modern musical instruments,” added Netshikweta, who has three successful Tshivenda traditional music albums to his name. 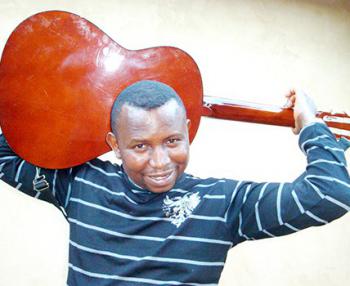