Mush has got the write stuff

After discovering his passion for writing at the age of 17, when he first co-founded a drama club at Mbilwi Secondary School with a friend, Pfano Mush has never looked back.

He continued to hone his skills by writing pieces, which he then shared with friends who supplied constructive feedback. He said that the aim of the drama club was to make a positive difference in the community. “But as I continued to write stage plays for the drama club, I fell in love with the art of writing,” he said. “I continued writing more stage plays, which were performed by learners for their fellow learners and the public, until I passed matric in 2016.”

He first had to convince his parents about his passion before they would allow him to study for a Bachelor of Arts degree with core disciplines in English Literature and Communication Science at the Varsity College in Sandton. He completed this very qualification last year. “I decided to study that course because I wanted to sharpen my writing skills and acquire knowledge,” he said.

Two years later, he published a novella, The Sandton Can of Worms, which exposed the hidden truths about the richest square mile in Africa, Sandton City. “I wrote the novella after experiencing some challenges that I never expected to go through in Sandton,” he said. “When I moved there in 2017, I had high hopes because of what the media sells to us about Sandton, but I learnt the hard way. This is why I decided to write a book that tells all the hidden truths about Sandton.”

Pfano Mush is available on most social media platforms. 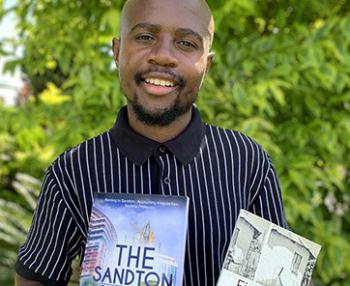 Pfano Mush displays his books, The Sandton Can of Worms and Fictions of His Life.