The novels, which are available in most major bookstores countrywide, have been described by both readers and reviewers as “unputdownable”.

Mulalo, as can be seen in the first book, is a young woman battling with a traumatic past and an unstable family on the verge of poverty. She is thrust into a lavish life funded by money-laundering and political power.

“Mulalo was raped at the age of 10,” says the author. “Her childhood trauma changes the course of her entire adult life. Shattered, confused and hurting, she becomes promiscuous and cannot form meaningful relationships.”

Sadly, a politician, who happens to be a family friend, inducts Mulalo into transactional sex while he fills the void in her life for a father-figure with a lavish lifestyle and unlimited dirty money.

“With her thirst for power, he uses her misdirected ambition to do his dirty work in a web of deceit, money-laundering and corruption,” Ndou tells. “The story reveals an underworld of young girls used by politicians and businessmen as sexual tools and their naïveté to shadow their corrupt business deals.”

At one stage Mulalo starts consulting a psychologist, but she struggles to outrun her traumatic past as she digs herself deeper into a grave of emotional turmoil. When her politician lover dies, she inherits his enemies and is in danger of going to jail if she can stay alive from threats from the Chinese.

The second book follows Mulalo’s life. Here, she is grown up and running a successful business until she gets tangled into a life with a false prophet who is living the highlife and involved in illegal businesses.

A renowned inspirational speaker who has also been featured on several radio stations, Khathu Maestro’s books are available at Exclusive books, Bargain Books, CNA and Takealot. 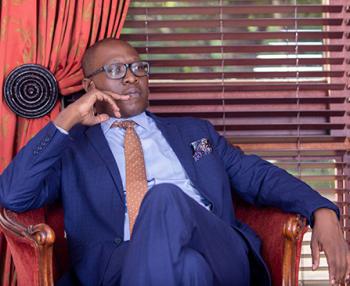 Khathu Ndou, better known as Khathu Maestro, is one of the country's best-selling authors. Picture supplied.