Bongani's music speaks to the heart

He is a songwriter, composer, performer, and producer, and Bongani Eric Nemathaga is establishing himself as a sought-after singer whose music speaks to the heart.

Bongani, who resides at Tshitereke village, said that he had discovered music when he was a young boy. “I would listen to popular American singers and copy their lyrics in a notebook,” he said. “I would stare at the lyrics in the notebook while the song was playing, sing along with their music and imitate how they performed.”

He attended a church where God was praised through song and accompanying musical instruments. “About playing instruments, I can say that it all started at church,” he said. “I’m one of the lucky few who were there when Worship House church started. I became their first keyboard player.”

After he matriculated, he studied music at the University of Venda, where he obtained a certificate in music.

“Music is life to me. I know it might sound like a cliché,” he said. “When I’m happy or sad I get to the studio and create a beat. Great music starts from a great beat. As a producer, creating music is my daily bread.”

Bongani believes that artists alone cannot do much to further their artistic aspiration. “We need a support structure from the Department of Sports, Arts and Culture that will take people – young and old – off the streets by getting them involved in arts,” he said.

He looked up to Bishop Isaac Dagada for mentorship. “When I was working with the Worship House band, I learnt a lot from him,” he said. “He used to say that playing a song should be like Tshikona because ‘nanga dzi lila nga u sielisana’ - tshikona flutes aren’t played in unison, they give each other a chance.”

He draws his inspiration from different artists such as Michael Jackson, Boyz II Men, Youssou N'Dour, Salif Keita, Michael Bublé, Sade, Bob Marley, UB40 and Colbert Mukwevho. “They all sound different and unique in their own way,” Bongani said.

His musical highlights include being signed by the major Les Royals music stable and releasing his megahit single, entitled Lalie. He cemented his presence in the music industry through songs such as Quarantine, Inhliziyo yami, Kgoshigadi, Mulitsheni, and Maele.

“I’m an instrumentalist,” he said. “I specialise in playing the keyboard. I can also play accordion, bass guitar, acoustic guitar, violin, penny whistle and drums. In my spare time, I enjoy teaching other people how to play musical instruments.”

Bongani’s music is available on all online music platforms and on the company’s website - www.lesroyals.co.za/music. For bookings, Edward Maposa can be contacted on tel. 082 436 2133 or email edward@lesroyals.co.za. 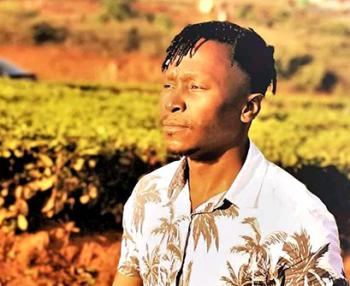 Bongani Eric Nemathaga is establishing himself as a sought-after singer whose music speaks to the heart. Picture supplied.