A student at the University of Venda, Tlangelani Ngobeni, has fallen so deeply in love with writing that she published, not one, but two books at the same time, entitled The Sun and the Moon Both Give Light (short stories) and A Land of Streams Made of Tears (poetry). Both books were issued via Amazon’s online platform on 15 October this year.

“I fell in love with writing mostly during my first year at the University of Venda,” said this resident of Phiphidi village. “However, I started loving writing while attending secondary school, during speeches and orations. So, I would write my own pieces in a notebook just for myself. Later I realised that writing was therapeutic for me.”

She revealed that The Sun and the Moon Both Give Light was inspired by the challenges people face every day. “It’s about giving inspiration, hope and to overcome the obstacles,” she said. “It simply says that though it may rain, there will always be a morning where the sun will rise again.”

Ngobeni’s heart is closest to poetry and her short stories carry lines which are poetic in a manner too. She said that ignoring the strength and artistry of writing was not easy. “I had written more short stories before, which all went missing and it pained me a lot,” she said. “But as a writer who has an inborn gift for writing, I continued to write new stories altogether.”

Ngobeni, who has a master’s degree in public administration, said that she used words to paint the kind of feelings she could not simply talk about. “I am able to confide in my notebook,” she said.

A Land of Streams Made of Tears is inspired by the mixed emotions that people go through every day. “Be it heartbrokenness, weaknesses or strengths. But above everything else, God will carry us through – that’s the kind of overall message I am trying to deliver through my writings,” she said. “We may fall many times, but when we are down there, we must always remember to rise again.” 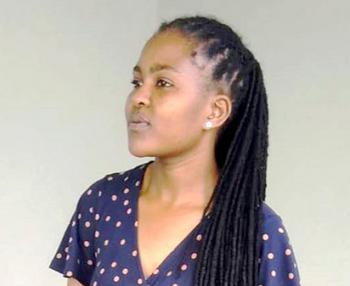 A student at the University of Venda, Tlangelani Ngobeni, has fallen in love with writing. Picture supplied.