The rise of Bianca

The talent of Bianca Hester Chikota is gaining momentum as she continues to release more singles that are popular among music lovers.

She was inspired to sing by her late mother, who would encourage her to sing and even compose some songs of her own. “Whenever I think about her, I take solace in the fact that she was loving mother whose support for my life and my music continues to mean a lot to me,” she said. She added that she acknowledged the support from her best friend, Tanya, who had all along been spurring her on to work harder if she wanted to make it in the music industry.

Bianca had discovered her singing talent when she was in Grade 7, during one of those occasions when learners were required to sing and she excelled, because she had a singing foundation that she had built from her days in church. “I sang a lot in church, and everybody there was touched by my voice that I started enjoying it to a point where I just felt I needed to do something with my voice because everyone would ask me to participate in the choir,” she said.

When she got to Grade 11, she released her first song, Women in Power. “I am of the viewpoint that artists should work on songs that touch other lives, and not just record and release songs for the heck of it,” she said. “We need more songs that relate to what the world and our youth are facing. For example, I released Women in Power, a song that expresses what I have gone through in my life, and I certainly believe I am not the only one, but it is a voice to tell other women out there that life itself is a struggle.”

She added that music could heal all broken souls. “I personally believe that in music we find the hidden messages; in music we hear the hidden realities, and in music we all find redemption,” she said. 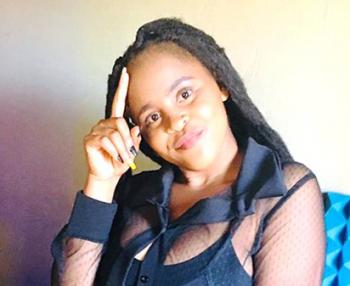