Blackpearlvee has become a popular artist in the music industry, and her talent is worth celebrating as she possesses a unique voice and fresh lyrics.

This artist, who was born Rabelani Vaidah Mugivhi, stated that she aimed to touch the lives of people with her music. “This is perhaps another reason why I incorporate other genres into my music,” she said. “I really love to sing about personal experiences, other people’s experiences and things that really move me, be it emotionally, spiritually or intellectually.”

A public relations graduate, she said that her love of music started at a very young age. “I loved listening to church choirs, and as I went on to school, I got involved in dancing, which then led to an immense exposure to house music,” she said. “In addition, I started experimenting with beats and writing my own songs. To really test myself, I recorded my first song in 2015, Endless love (ft Tebza, Huzzy and Igwe), which was produced by DJ Phipho.”

With Blackpearlvee, music speaks a kind of language that cannot be easily expressed in simple words. “It heals the heart and makes it whole. To me, music is a way of communication that heals the mind, body, and spirit,” she said. “Every artist loves to entertain their audience, but it’s important for me to inspire people through my music, to let them know that music can be about everything, anyone and knows no age,” she said.

She has largely been motivated by her sister, Munyadziwa Mugivhi-Khedzi, who always said to her: “In order to make it in life, one should set goals, be patient, believe in one’s dreams and work hard”.

She stated that she was inspired by everyone who was living their dreams and mentioned the popular Makhadzi as an example. “Makhadzi inspires me a lot,” she said. “I like the energy she puts into her work. She is a survivor, no matter what she came across along her journey in music.”

Blackpearlvee’s first break into the music industry came in 2018 when she was announced the winner of a singing contest that was sponsored by the Thavhani Mall.

“This year I recorded my first Amapiano single, entitled Tonto, which was produced by Phathutshedzo “Shadoh Vee Beats” Mudau.

“We are in lockdown, but I am very proud to have touched a lot of people’s lives through my song,” she said. 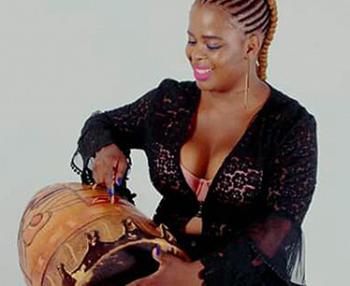