A new album for MacDonald after lockdown

He did not know that playing with his father’s guitar would end up instilling a love of music in his life. But years later, he is now regarded as one of the top local reggae artists in Vhembe.

To date, he has released three successful albums, making him one of the undisputed reggae music ambassadors locally. He is now working on his fourth album, which will be released after the lockdown.

This is the inspiring story of Ndivhuwo MacDonald Muofhe of Nzhelele Shanzha village, who is famously known by his stage name, Rasta Mac-Donaldson. Even though he was only born in 1994, no one can doubt that Muofhe’s music is more mature than his tender age.

Because of his love for reggae music and Rastafarianism, he was always at loggerheads with his teachers at Shavhani Primary and Tshilogoni Secondary School. They wanted him to cut his dreadlocks, resulting in a tough battle that he ultimately won. He was once in the newspaper headlines when he was nearly expelled from school for refusing to cut his treasured dreadlocks.

After his father bought him a guitar, he developed more interest in music and started playing guitar and keyboards at a local church.  The music bug continued to bite him hard and he ended up going to the studio to record his first album, entitled Shango lo vhilingana, in 2014.

He said about his road to stardom: “Shango lo vhilingana did very well, and I couldn’t believe that people were so interested in my work because it was my first album. This encouraged me to put more effort into my music because I was sure that I had a large following of loyal fans. I then returned to the studio in 2018 to record my second, One Love Africa, which was also well received by my fans. Last year (2019), I released my third album, Musadzi wa vhukuma, which is penetrating well in the music industry. My fourth album, Mutsinda ndi khwine, will be released immediately after the lockdown.”

Muofhe said his musical maturity was the result of working and sharing the stage with heavyweights in the music industry.  “I realized that music is broad, and you need the guidance and collaboration of fellow artists to grow. Although I grew up listening to the music of Eric Donaldson and Yellowman, I have learnt a lot from great local artists like Black Jahman, Empress Asataluli Manngo, Shufflers Ragimana, The Receptors Band , Unwary Man, Rash Man Carlos, Ras Lion Munyai, Given Harmonic Madzunye, Summerboy Poet, to name but a few.” 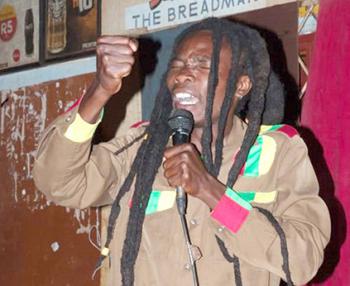 Ndivhuwo Rasta Mac-Donaldson Muofhe is making a name for himself in the local reggae music fraternity. Photo supplied.