Man In Crisis is a romantic movie which follows the journey of a Limpopo-born musician who has to choose between following his dreams of becoming an international star or coming back home to Limpopo and continue on his family legacy.

The musician character, Shandu Mmbara, is played by Lesley Musina whose path meets that of a beautiful young woman, Rendani “Rendy” Shai, played by Millicent Makhado.

The film is rated PG, and the storyline communicates the interest of love and cultural integrity which has massive appeal to youth and older audience.

The movie's executive producer and managing director at Dambuwo Tv, Shadie Mphaphuli, states that Man In Crisis is an original Limpopo story that has a massive appeal to local audience since it has a sense of familiarity regarding geography, culture and milieu.

“Viewers will be seeing people and places they know, culture they identify with, and their very own, local-born stars on the big screen,” he said. “It is a motion picture produced at an estimated budget of R6.5 million, set for limited cinema exhibition in Limpopo's local cinemas and designated main halls around mid-December this year, before it opens to the rest of South Africa and the world in 2020.”

The hope is that, with successful target marketing and distribution, the movie is guaranteed to be a stand-out hit nationally.

The actors are excited about Man In Crisis and they have termed it an “authentic African story” that will appeal to a wider audience.

“A film of this nature is instrumental in the context of African societies and culture where the film practitioners across the board, regardless of which department they represent in the fraternity, [have] an opportunity to showcase their talent, and practise and tell their own stories with their own narration as opposed to what used to happen with people who came from afar and tried to tell our stories,” Gabriel Temudzani said.

“It also changes the dynamics of the game where we are so used to the familiar scenario wherein we stand in front the mirror, we see other people and not ourselves. Through production houses like Dambuwo Tv, we get to bridge that gap, break the stereotype and rewrite the script.”

Another actor, Millicent Makhado, hailed Man In Crisis an original multi-lingual African story that speaks to people about the true life and challenges that they face and create a space of addressing those challenges.

“I enjoyed the storyline because it took me from my comfort zone of my past work,” she said. “It is an interesting, diverse film that afforded me the opportunity to learn from fellow industry colleagues. I hope viewers will enjoy this original movie.”

Shadie is not a novice in the film industry. He has previously worked in the film industry in at least fourteen African countries, five European countries, as well as Brazil, Canada and the USA. As a seasoned broadcaster with SABC, M-Net, SuperSport and Sport 5 in senior and managerial positions, he has also worked as a show runner and a conceptualiser for at least six shows.

Mother in crisis: Rendy finds herself in a painful situation where her daughter needs surgery and she has no financial means to ensure that her daughter is helped. Photo supplied. 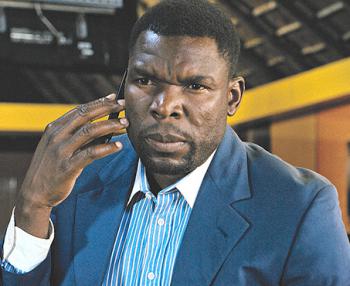