Crowd give village gospel a thumbs up

The idea of taking gospel music to the villages was given a thumbs-up by music lovers who braved the chilly weather to rub shoulders with their favourite gospel singers during the Shela Muya Night at the Makhuvha Apostolic Unity Church a fortnight ago.

The host of the show, Lufuno Phalanndwa, was given a standing ovation when he ascended the stage. His performance did not disappoint as he dished out hits from his sizzling hot album Midnight hour worship. The songs Ndo mu vhona, Shela Muya, Nikodemo and Vho Luga took the fans into a frenzy, with some showering him with money as he performed.

One supporter who could not sit down as Lufuno mesmerised the audience was Andisa Phuluwa, who described Lufuno as a rare breed in the gospel industry. “Lufuno offered us exactly what we had expected – a quality performance,” she said. “He is a powerhouse. He is amazing. I was there when he recorded his album and now here, he also delivered the same energy and feel. We are proud to have a youth doing such big things for the community.”

After the show, Lufuno was full of gratitude for the support he received from his fans. “What I saw was amazing and I thank God for it all,” he said. “The love I received from the people is extraordinary. It was very cold, but the people came through in numbers and their dancing and ululating made the atmosphere to be world class.”

When asked what his supporters could expect going forward, Lufuno just said “Gauteng nga December”, which literally meant that he would be planning something for his Gauteng supporters.

Lufuno is available on Facebook and he can be reached through his manager, Robert Netshiunda, on 082 451 7170. 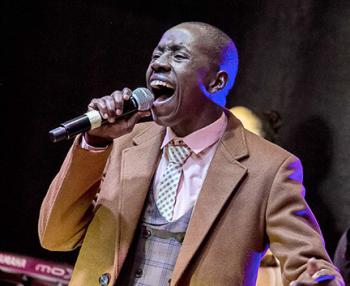 Lufuno Phalanndwa was given a standing ovation when he ascended the stage.