I was born to do music

A local artist, Tcire, believes her time to shine has come.

She released an extended-play record (EP), Maybe, with six songs. She was born Tsireledzo Coline Madzine.

The songs are Red, Words, Maybe, Go home, Why a so, and I might notice.

She released it for free download with the intention of finding the particular sector of the population that favours her music and she also wants reviews of her music.

The 27-year-old from Thohoyandou had a huge musical upbringing, with a memory of her father playing the organ as the whole family sang together. "I started singing at the tender age of 12. I only decided to begin my music career late in 2016 when I gave my first performance. When I began with my university studies, I contemplated taking music as a career," she said.

She broke into the industry when she was featured on the track, Love me, by Murumba Pitch.

One of the people she looks up to is her sister, Muvhuso, who is in the music industry too, and the likes of Tracy Chapman and Siphokazi. "I'm inspired by different forms of art that are mostly reflected through her music, especially in the genres of Afro soul, Indie and house music. Her voice and music have deep influences of Soul, RnB, traditional and pop music," she said.

She writes her own music and is known for her soft, calming voice and relatable, deep lyrics.

She said uniqueness and originality were the best elements to keep the industry alive and that audiences were tired of hearing the same thing from different people. “Even though music is a derivative form of art, it is important to fuse yourself as an artist into it, thus making you instantly recognisable to the public and having them demand more of your music."

She feels that the industry needs young and fresh talent. "It needs people who are brave enough to find themselves in their roots and stick to what they know best with regards to their music," she said.

She said artists should not focus on the income that their talent will bring, but the passion they have for their talent. 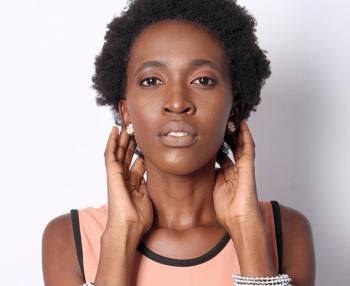 Tcire want to make her mark in the music industry. Photo supplied.